Sterling holds below $1.30 as Conservatives lead in polls - REUTERS

LONDON (Reuters) - Sterling inched higher towards $1.30 Monday as the Conservatives lead in polls for Britain’s general election, boosting the chances of Prime Minister Boris Johnson’s withdrawal deal being passed by parliament before the Jan. 31 Brexit deadline.

A poll published by ICM for Reuters on Monday showed the Conservatives extending their lead over Labour to 10 points.

“(The) market’s just moving to price in a higher likelihood of a majority for the Tories,” Lee Hardman, currency analyst at MUFG, said, using a colloquial name for the Conservative Party.

“We’ve had the opinion polls at the weekend generally all showing increasing support for the Tory party, making the market more confident they could win a majority, seen as more favourable in the short term,” Hardman said.

In a conference of business leaders organised by Britain’s main business lobby, the CBI, Johnson said the government was postponing corporation tax cuts.

The CBI’s director general warned that British businesses face the threat of extreme ideology from both the left and the right wing of politics. The pound was unchanged by her comments.The pound was last up 0.5% against the dollar at $1.2964 after touching $1.2985 earlier, its highest since Oct. 22..

If sterling rises above the $1.3012 level hit in October, it would be at its highest since May.

Versus the euro, the pound strengthened further to reach a new six-month high of 85.22 pence, last trading around 0.2 percent higher at 85.49 pence. “The $1.30 level is quite a strong psychological resistance here,” Nomura’s Rochester said. “For it to really have momentum, you need to see the Labour Party’s manifesto not do as well as it did in 2017.”

Left-wing Labour is expected to release its manifesto on Thursday.

Analysts at JP Morgan wrote in a note to clients that a break above the $1.30 level was unlikely at this stage of the campaign cycle.

Weekly futures data showed that positions betting against the pound versus the dollar fell in the week to Nov. 12 to the lowest levels since May. The net short position means that the pound has more potential to appreciate on good news than depreciate on bad news.

Implied volatility gauges for sterling for one-month maturities - encompassing the election - jumped to more than 11%, nearly doubling from levels of around 6% earlier this month.

This pushed out spreads between one-month and two-month maturities to widest levels since the June 2016 Brexit referendum vote. 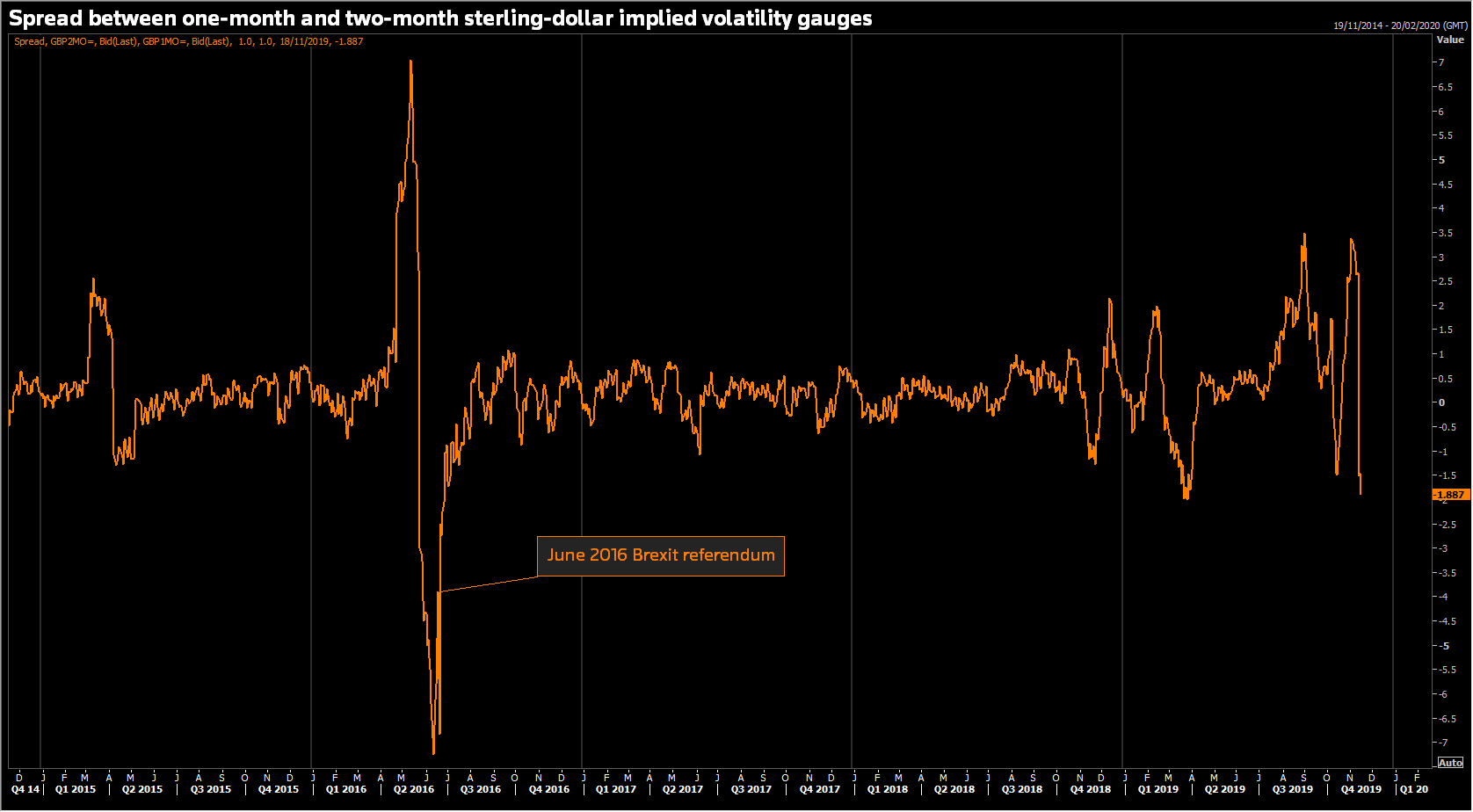