Sterling down slightly, but traders remain hopeful of a Conservative Party majority - REUTERS

LONDON (Reuters) - Sterling was slightly weaker on Tuesday, though not far from a six-month high versus the euro, as traders remained broadly of the view that the ruling Conservative Party will get a majority in Britain’s parliament following the election next month.

If the Conservatives were to win a majority on Dec. 12, expectations are that the Brexit deal agreed with Brussels last month would be approved by the House of Commons and that Britain would exit the European Union on Jan. 31, ending three-and-a-half years of uncertainty.

Farage also said last week his party will not contest the seats Tories won in the 2017 election.

Much of the expectations of a Tory win are already priced into the pound, HSBC strategists told Reuters.

“While sterling definitely looks cheap, the Johnson majority is 70% priced in after this weekend’s polls and the pound is unchanged over the past month,” HSBC strategists said, adding that the right question was not whether sterling will jump in the next two months, but by how much.

“You would be hard-pressed to find a sterling bear out there right now.”

The same view was shared by ING strategists, who do not expect the pound to strengthen beyond 85 pence per euro on Tuesday, even if Johnson was to triumph in the first televised debate with opposition Labour Party leader Jeremy Corbyn later in the day.

The fact that British manufacturers saw a pick-up in orders in November failed to impress pound traders.

One-month implied volatility gauges for sterling show, however, that investors remain nervous about the outcome of the election.

Options prices are at their highest since mid-October and have nearly doubled in value since the beginning of the month. This essentially shows that demand for protection against sterling volatility has spiked, implying severe currency moves around election time. 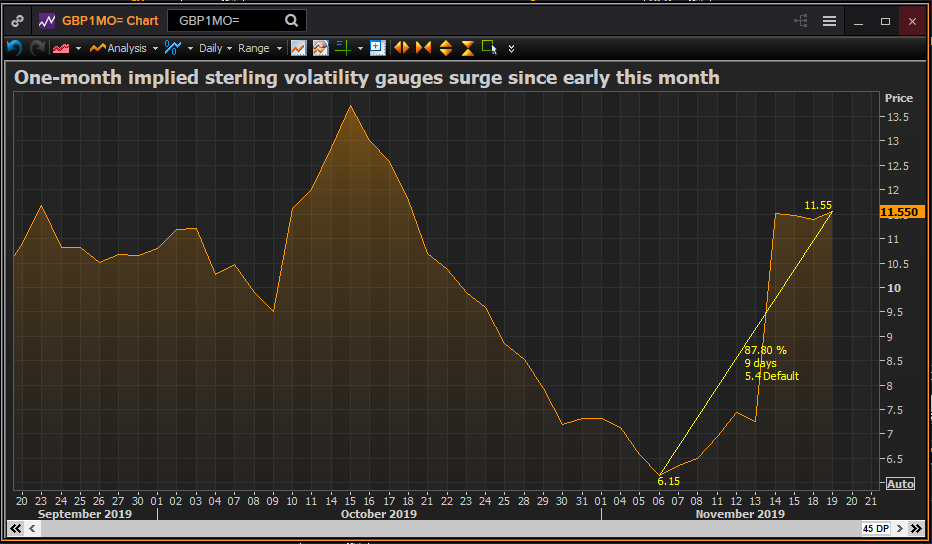 “While the results of the election in terms of how many seats each party gets are still up in the air, the effective results are actually quite simple and binary,” said Marshall Gittler, strategist at ACLS Global..

If Johnson’s party were to fail to secure more than half of the seats on its own, “there will be a minority government and probably be a second referendum”, said Gittler, given that “none of the opposition parties is willing to enter into a coalition with the Conservatives this time around”.