European Union plans to cut greenhouse gas emissions by at least 55 per cent before 2030 could discourage tourists from visiting Spain, according to new estimates.

The report from consultancy firm Deloitte looked at the potential impact of the European Commission’s ‘Fit for 55’ plan on the tourism industry.

It predicts that environmental measures like ticket taxes and sustainable aviation fuel could mean the loss of 11 million international tourists to Spain. The country could also lose billions of euros in tourism revenue and 430,000 jobs that rely on the industry.

What green measures is the EU planning to introduce?

The EU is looking to cut its carbon emissions using a number of different measures - including many aimed at reducing the aviation industry’s impact on the environment.

The measures established by the European Commission under the Fit for 55 plan include a quota for the use of sustainable aviation fuels set at 5 per cent, tightening caps on carbon emissions, and higher taxes on aviation fuel and tickets.

Together, the report concludes, the introduction of these measures by 2030 would result in travel to Spain becoming more expensive. The higher costs could end up discouraging tourists from visiting the country. 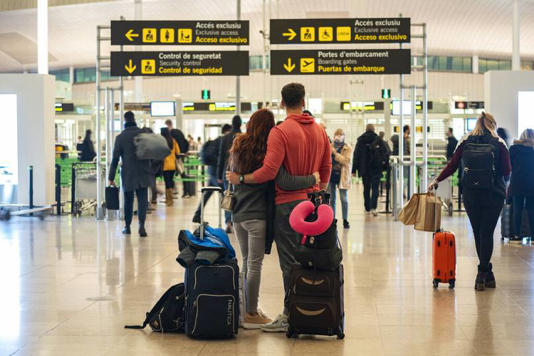 A couple stands outside the security control section inside a terminal of the Barcelona Airport. AP Photo/Joan Mateu Parra© Provided by Euronews

How will the EU’s green measures impact Spain?

Overall, Deloitte predicts that 11 million international tourists could be put off by higher costs. Across accommodation, food, drink and other sectors that rely on tourism, this would account for around €12 billion of spending.

Looking at predictions for employment in 2030, the report also found that 430,000 jobs could be lost - mostly due to passengers lost from the tax on fuel and tickets.

Are the EU’s changes to the aviation industry worth it?

Though the EU measures may seem as if they come at a high price, they are necessary to achieve net zero - a goal many in the travel industry are dedicated to.

“In the aviation sector we are committed to achieving net zero emissions by 2050,” says the president of Spain’s Association of Airlines (ALA), Javier Gándara.

“We share the goal with the EU and with our Government, but we believe that there are other solutions on the way to achieve that goal that are more effective and favourable for the economy and employment.”

Gándara has asked the Spanish government to reconsider a tax on jet fuel, instead calling for other “more effective and favourable” measures like sustainable aviation fuels.