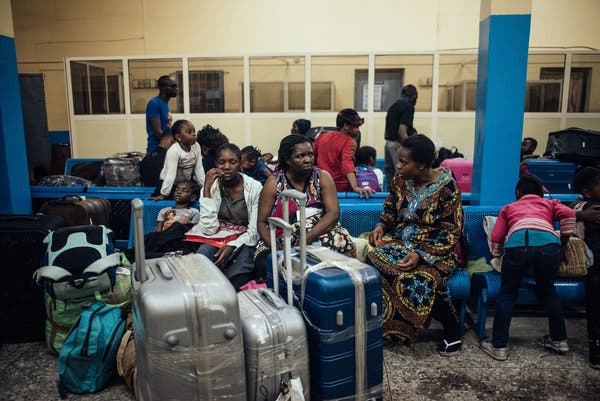 Patience Ndukwu, center, and her children fled South Africa and returned to Nigeria, leaving behind a restaurant that struggled after mob attacks began.CreditCreditKC Nwakalor for The New York Times

The Times reports from 140+ countries.

When a story starts with a city, it means we were there to report it.

LAGOS, Nigeria — They fled mob attacks and the torching of their stores and arrived with nothing but their children and their suitcases. More than 300 Nigerians landed in Lagos on a flight from Johannesburg late Wednesday because their old lives — as immigrants living in South Africa — had become untenable.

They arrived after dark, descended from the plane and lined up at the door of a yellow transit center, eyes glassy with fatigue. Sign here, officials told them. Wait there. They had little money and almost no plans.

Hatred of foreigners, they said, had long been a problem in South Africa, and it is what finally drove them out.

“If I had stayed,” said Socarvin Onuoha, a Nigerian who owned a cellphone shop for more than a decade, “I would have died.”

Subscribe for original insights, commentary and discussions on the major news stories of the week, from columnists Max Fisher and Amanda Taub.

Africans from around the continent have emigrated to South Africa for years, expecting to find a land of opportunity, a place to raise their families. Now many are fleeing, carrying the painful realization that the country they once thought would deliver their dreams had instead turned nightmarish. 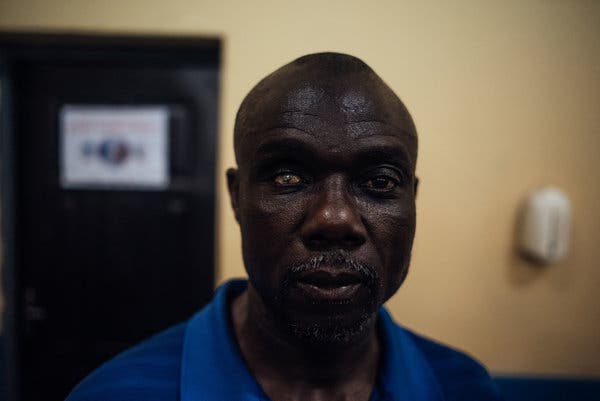 “If I had stayed,” said Socarvin Onuoha, a Nigerian who had owned a cellphone shop in South Africa for more than a decade, “I would have died.”CreditKC Nwakalor for The New York Times

Hostility had been building for at least a decade, with many South Africans blaming foreigners for their country’s economic ills, sometimes accusing immigrants of taking jobs and housing. Nigerians have said they experienced particular prejudice, often stereotyped as drug dealers and thieves.

That animus burst into violence this month when people in and around Johannesburg began looting and burning foreign-owned shops. The attacks killed at least 12 people and prompted a diplomatic rift between South Africa and Nigeria, threatening relations between the continent’s largest economies.

In an attempt to make amends, South African president Cyril Ramaphosa sent an envoy to Nigeria this week who delivered “sincerest apologies” for the attacks, and promised that the perpetrators would be prosecuted.

But the Nigerian government has gone ahead and begun airlifting its citizens out of South Africa, arranging flights for anyone who wants to leave, with the help of a private airline. The first plane arrived last week, carrying almost 200 people; the second, with 314, arrived late Wednesday.

Mr. Onuoha, 55, said that he fled his cellphone store when it was attacked by an angry mob this month. He decided to abandon his business, his car and his furnished home and return to Nigeria. On Wednesday, he sat on a hard blue bench inside an airport building, surrounded by other returnees, including his children, 17 and 18. 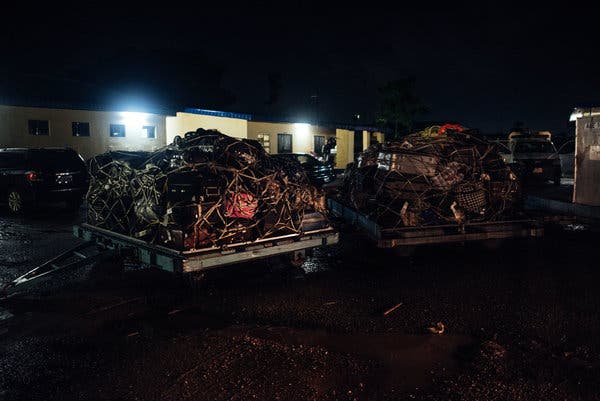 Returnees’ luggage being taxied to the cargo terminal of Murtala Mohammed International airport.CreditKC Nwakalor for The New York Times

The teenagers spoke English with a South African accent. Mr. Onuoha had 50 rand in his pocket, about $3. “I don’t know where I’m going to sleep tonight,” he said.

When the flight landed, the first person to make it to the door of the transit center was Patience Ndukwu, in a pink print dress, accompanied by four children, ages 6 to 14, one wearing a T-shirt that read “Rise to the challenge.”

Ms. Ndukwu was told to write her name at the top of a spreadsheet, and then she was shuttled along to the cellphone center, where she was given a Nigerian SIM card and next to the imaging corner, where someone took her picture against a white backdrop and then to more desks, where she filled out more paperwork. Someone handed her meals in tupperware, a phone number to help with a business loan and an envelope with a few days’ worth of cash, courtesy of various Nigerian government entities.

When she finally sat down on one of the benches, her eyes darted about. It was very loud. Some of her bags had spilled open. She had no idea what was next. 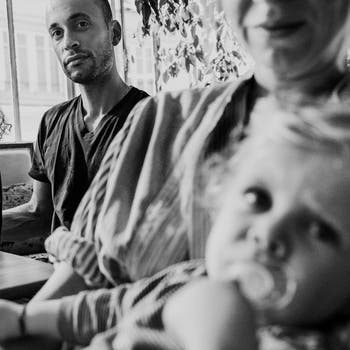 My Family’s Life Inside and Outside America’s Racial Categories 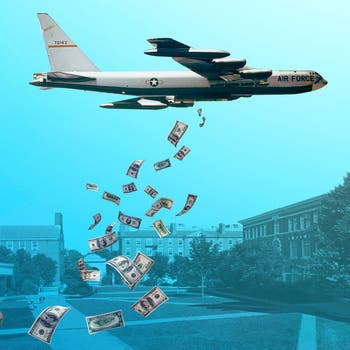 The Koch Foundation Is Trying to Reshape Foreign Policy. With Liberal Allies. 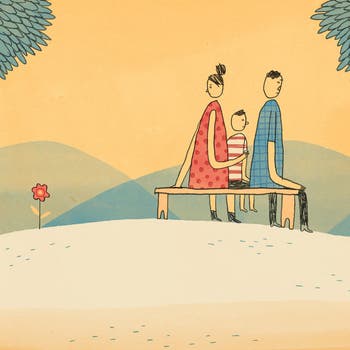 Wishing the World Could Be More Soft

Ms. Ndukwu had moved to South Africa in 2007, she said, following her husband, also a Nigerian. She had started a restaurant, but when the attacks began, business died off. 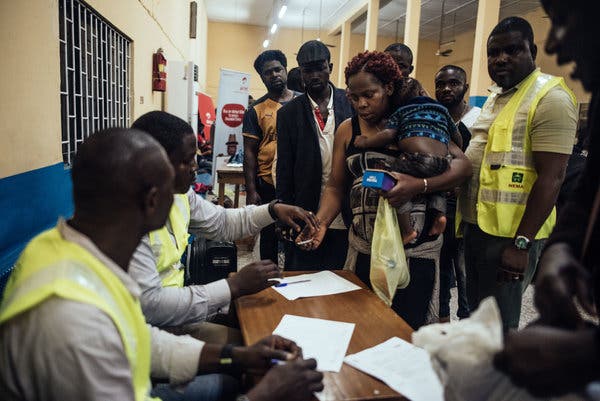 Returnees lining up to get their travel documents verified before they are handed envelopes of money, courtesy of various Nigerian government entities.CreditKC Nwakalor for The New York Times

“Everything went, just fast, fast, fast,” she said. She attributed the attacks to “jealousies” that had festered in South Africa for years.

Not far away, Pentecost Ikechukwu, 33, stood with his wife Sandra, 29. They’d had two children in South Africa: Favor, now 3 and Gracious, almost 2. Mr. Ikechukwu is from the Nigerian state of Imo and left his home “dreaming of getting a better life.” But a few weeks ago, the shop where he had found a job was set on fire and, Mr. Ikechukwu said, his boss ended up in a coma.

The boss had yet to wake up, he said, and Mr. Ikechukwu left with $7.

“If I could do my life again, I would never have stepped foot in that country,” he said. “It’s a destiny killer. It destroyed me.”

Nigerians — along with people from countries like Somalia and Zimbabwe — have moved to South Africa for years in search of work and education. Nigeria has an unemployment and underemployment rate of more than 40 percent, according to national data.

But South Africa is still struggling with the legacies of colonialism and apartheid and has its own economic problems. Many poor South Africans have not found real change since the end of apartheid. Anti-immigrant sentiment has become common. 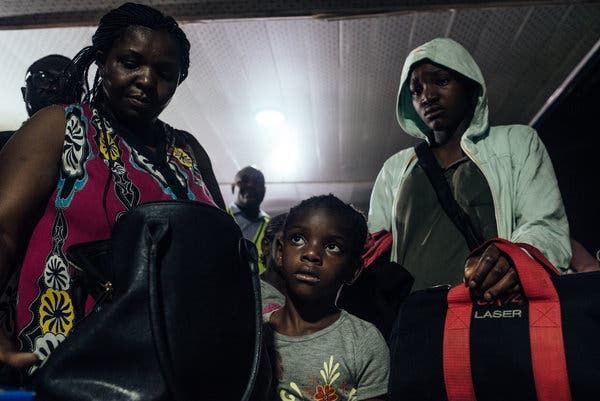 Patience Ndukwu, left, returned to Nigeria with four children, three of whom had been born in South Africa.CreditKC Nwakalor for The New York Times

Government critics have blamed politicians for stoking these prejudices to deflect responsibility for the country’s problems. In 2008, anti-immigrant attacks left more than 60 dead and displaced tens of thousands of people. In 2015, unrest killed seven as gangs hunted and attacked foreigners.

In early September, a new spate of anti-immigrant protests began. For days, rioters burned cars and buildings; some came armed with spears, batons and axes.

At the transit center, Mariam Bisiriyu unleashed her anger at some Africans for killing other Africans.

“They kill our brothers, for nothing,” she said. “For nothing.”

Ms. Bisiriyu, 30, said that in her most vulnerable moments in South Africa — when she was robbed, for instance, or when she was giving birth — she felt ignored and disparaged by police and doctors. Her children, born in South Africa, were not granted citizenship, she said. She worked at a salon, braiding South African women’s hair, but ultimately left fearing for her life.

Ten of those who died in the riots this month turned out to be South African citizens, the country’s defense minister said recently; two were foreigners. 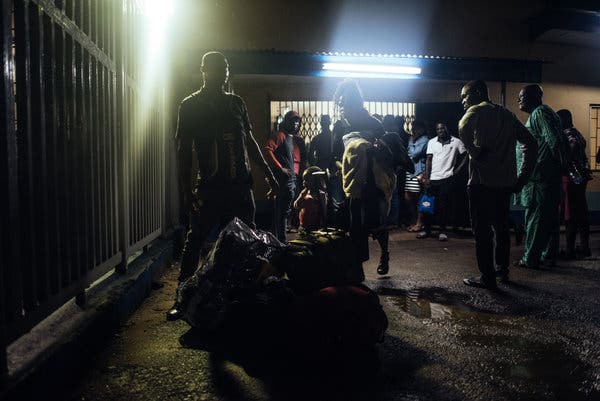 “If I could do my life again, I would never have stepped foot in that country,” Pentecost Ikechukwu, left, said of South Africa. “It’s a destiny killer. It destroyed me.”CreditKC Nwakalor for The New York Times

Inside the transit center, Nigerian volunteers doled out SIM cards and offered medical assistance. Several said they had also fled South Africa. Banke Faleye, 37, a hospital administrator, said she had moved to South Africa in 2018 to get her Master’s degree, but left when she tired of taxi drivers accusing her of dealing drugs.

Pelumi Odeh, 32, another volunteer, pointed out that South Africans weren’t alone in disliking foreigners. “It’s happening in America,” he said.

Many of the returnees had no idea what was in store, or how they’d tell their families that they had failed to achieve great riches.

Some hadn’t even arranged for a ride out of the transit center. A few tucked in for the night under the harsh lights.

Near midnight, Mr. Ikechukwu, the father of Favor and Gracious, stood by the exit door. “No plan,” he said. He wasn’t sure where they would sleep, or how they would get to Imo.

But he didn’t want to stay stuck in the past.

“Let’s go,” he said to his wife and daughters, ushering them past a metal gate and into a dark, muddy parking lot.There, they stood by a puddle, waiting for whatever was next.