Millionaires now hold nearly half of the world’s wealth - CNBC

The number of millionaires in the world grew to nearly 47 million over the past year, and they now own close to half of the world’s wealth, according to a new study.

Despite the trade wars, slowing global growth and the volatile stock markets, the total number of millionaires in the world increased by 1.1 million from the middle of 2018 to the middle of 2019, according to the Global Wealth Report from Credit Suisse. The world’s 46.8 million millionaires are now worth a combined $158.3 trillion – or 44% of the world’s total wealth.

Australia was the biggest loser of millionaires, down by 124,000 to 1.2 million, but much of that decline was due to exchange rates, since millionaires are measured in U.S. dollars. 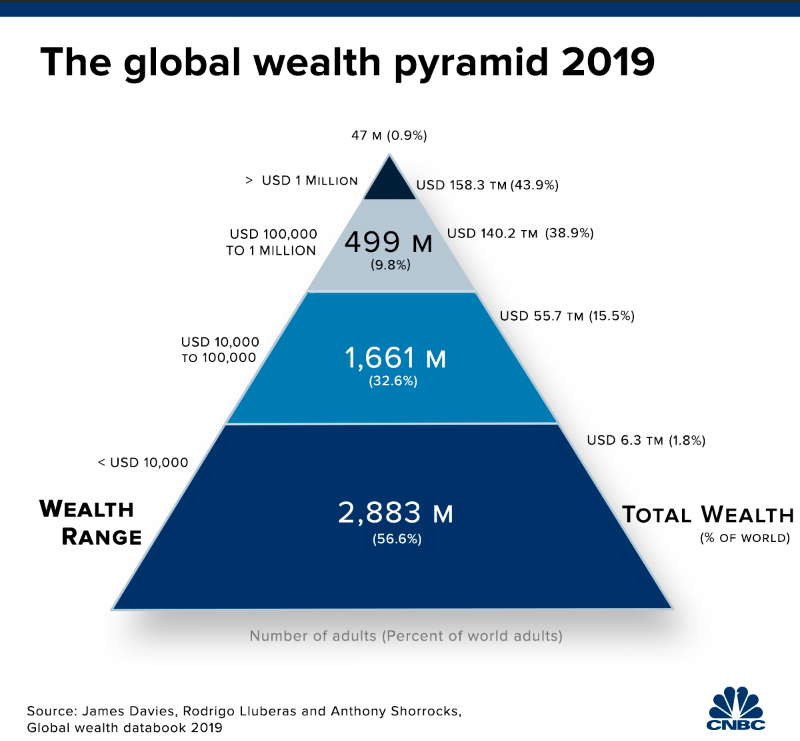 While the U.S. towers over China with millionaires, the report said China now leads the U.S. for the first time in the number of “global wealthy,” defined as those in the top 10% of wealth in the world.

The concentration of wealth at the top has become a key topic in the Democratic primaries. Sens. Elizabeth Warren and Bernie Sanders have both proposed wealth taxes as they campaign for president. Both of their proposals would impose a tax on accumulated assets and savings rather than just income. The bottom half of the world’s population account for less than 1% of global wealth, according to the report. The bottom 90% of the world’s adult population – about 4.5 billion adults – account for 18% of global wealth.

The report said inequality has declined for the past three years and is expected to continue its downward trend as more of the world’s lower-middle class and middle class gain ground.

“While it is too early to say that wealth inequality is now in a downward phase,” the report said, “the prevailing evidence suggests that 2016 may have been the peak for the foreseeable future.

Correction: The number of new millionaires in China is 4.5 million. An earlier version misstated the total.