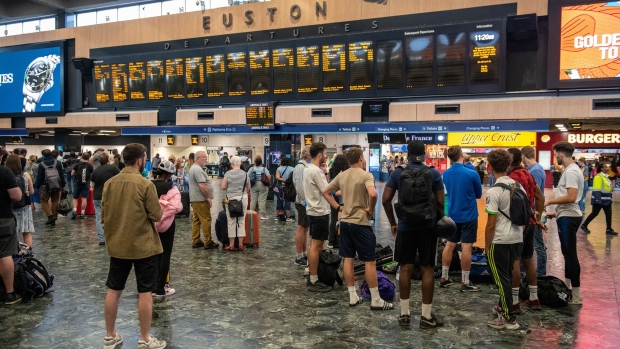 LONDON, ENGLAND - JULY 30: Rail passengers wait for announcements at Euston train station on July 30, 2022 in London, United Kingdom. ASLEF Union says that train drivers have not had a pay rise since 2019 and coupled with inflation expected to rise to 11% this Autumn, it amounts to a substantial pay cut. (Photo by Chris J Ratcliffe/Getty Images) , Photographer: Chris J Ratcliffe/Getty Images Europe

Britons face some of the most widespread disruption of the so-called summer of discontent over coming days as rail workers stage nationwide strikes and bus and subway staff hold stoppages in London.

The industrial action on public transport will be followed Sunday by the start of an eight-day strike by dockers at Felixstowe, the UK’s biggest container port, which threatens to create shortages of everything from toys and consumer electronics to clothes and furniture.

Trains across the UK will be canceled on Thursday and Saturday amid strikes by the National Union of Rail, Maritime and Transport Workers, affecting 14 train operating companies and state-controlled track and stations owner Network Rail Ltd. The same two days will see walkouts by members of the Transport Salaried Staffs’ Association at seven train operators.

Companies across Britain are suffering a surge in industrial action as soaring inflation stokes pay claims against a background of labor shortages. The rail sector has been hit particularly hard, with drivers at the Aslef union also staging national strikes, as the government presses firms to modernize and trim costs in light of a drop in commuting following the coronavirus crisis.

A union-led group called Enough is Enough will launch a series of 50 rallies across Britain from Wednesday as it calls for measures including real-terms pay rises for workers, energy-bill cuts and higher taxes for top earners.

A Network Rail spokesman said there’ll be no trains at all across half the UK system on Thursday and Saturday, slightly less disruptive than during strikes in July amid improved availability of staff in Scotland. On the remainder of the network, services will be reduced to only a fifth of the usual timetable.

Thursday will also see a reduced service on the London Overground, Elizabeth Line and some London Underground subway routes. And on Friday, sandwiched between the mainline shutdowns, the whole of the Underground faces a one-day strike, just as bus drivers in the capital begin a two-day walkout.

Bus journeys in west and northwest London and parts of the counties of Hertfordshire and Surrey will be impacted, according to Transport for London.

“We’re urging people to avoid traveling on the Tube and only travel if essential on the rest of the network,” TfL Chief Operating Officer Andy Lord said in a statement. For the whole of the period from Thursday through Sunday people should plan ahead and “expect disruption,” he said.

Britain’s roads, already crowded with holidaymakers, are likely to suffer increased snarl-ups as a result of the strikes. Traffic levels increased by 49% during June transport walkouts and by 36% last month, according to satellite-navigation software provider Waze. Bottlenecks are most likely on the M25 encircling London, the M60 around Manchester, the M5 linking the Midlands with the Southwest, and along the M6 that runs to the Scottish border.

While the walkouts will upset travel for millions of Britons and force many to work from home as they did during pandemic lockdowns, the strikes at Felixstowe amid a dispute with CK Hutchison could be potentially more problematic for the UK economy, strangling off imports on the busiest container routes from East Asia.

Workers at Peel Ports Ltd.’s Port of Liverpool, which is more important for trade with the Americas, have also voted in favor of strike action. Rival docks including Southampton and London Gateway will seek to pick up some diverted flows.

Among further strikes that are looming, some 115,000 postal workers are set to walk out for two days next week as the Communication Workers Union presses for improved pay at Royal Mail Plc. There have also been “wildcat” strikes at factories and industrial plants.