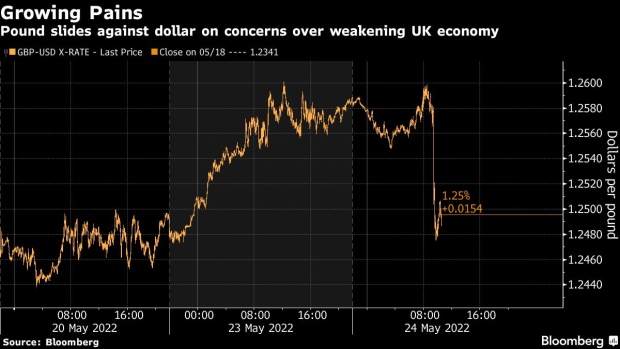 (Bloomberg) -- The pound tumbled and investors rushed to the safety of government bonds after an index of UK private sector growth unexpectedly slid in May to reawaken fears of a recession.

That led traders to rein in bets on further interest-rate hikes from the Bank of England, given the risk that higher borrowing costs will halt growth. The pound fell nearly 1% against the dollar, reversing Monday’s gains and making it the most volatile Group-of-10 currency this week.

Traders piled into short-dated government debt, driving down the two-year gilt yield by 12 basis points to 1.45%, its biggest drop in two weeks. Bonds are benefiting as money markets expect about 15 basis points fewer rate increases this year, a day after BOE Governor Andrew Bailey said a cost-of-living crisis will be factored into policy decisions.

“After Governor Bailey’s not-so-hawkish comments yesterday, today’s PMI figures underscore the real income shock on the UK economy,” said Geoffrey Yu, a senior foreign-exchange strategist at Bank of New York Mellon. “If we had to pick one G-10 central bank most likely to pause soon, it would likely be the BOE.”

S&P Global’s index of private sector growth unexpectedly slumped in May to levels last seen in February 2021, when coronavirus lockdowns were still in place, the firm said Tuesday. The speed of the slowdown was the fourth-largest on record and worse than anything seen before the pandemic hit.

“These are stunning decreases over such a short period of time,” said Christopher Dembik, head of macro analysis at Saxo Bank, adding that inflation is still “out of control” and a technical recession is likely in the UK this year.

The data gives policy makers bandwidth for just one more 25 basis-point hike at June’s meeting at a maximum, according to Simon Harvey, head of currency analysis at Monex Europe. The BOE has already implemented four back-to-back hikes to deal with surging inflation.