Anxiety in aviation agencies over sack of FAAN chief - THE NATION

There were fears yesterday among heads of aviation agencies following the sack of the Managing Director of the Federal Airports Authority of Nigeria (FAAN), Saleh Dunoma.

Sources said the removal of Dunoma may spark the process for cleaning up the sector by outgoing Minister of State for Aviation, Hadi Sirika, who, it was learnt, may return to the industry as substantive minister.

Heads of the agencies were anxious about what may become their fate as Sirika ramps up inauguration of facilities at some airports at the weekend in Lagos, Benin and other locations.

The agency heads were worried about their inability to read the body language of the minister of state, who was seen touring airports with Dunoma last Friday only to fire him yesterday.

When The Nation visited the headquarters of FAAN, NCAA, NAMA, AIB and the liaison office of NCAT, scores of workers were discussing the development in groups.

Some directors in the agencies wore long faces, as the sack of the FAAN boss caught many of them napping, given the fact that Dunoma accompanied Sirika to tour facilities at the airport at the weekend.

Sirika, the workers noted, could not be predicted on the next line of action he may take.

He had asked Dunoma when some projects at the Lagos Airport would be completed, only to fire the FAAN chief a few days later.

Some aviation members, who declined to be named, urged the minister of state to extend the exercise to the NCAA.

They said the leadership of the apex civil aviation regulator had allegedly been insensitive to workers’ agitations.

NCAA workers alongside union members, last week, staged a protest at its headquarters to express their disenchantment over what they called lopsided organogram.

They said this resulted in the scrapping and merger of directorates in the authority.

In an interview yesterday, industry critic and Chief Executive Officer of Centurion Securities, Group Captain John Ojikutu (retd) said the sack of Dunoma was in order because he needed time to rest after serving FAAN for many years.

Ojikutu said Dunoma, having served as the agency’s Director of Engineering and Managing Director for 10 years, should be commended for achieving the certification of Lagos and Abuja airports within four years.

He said: “For me, he needs to rest after almost 10 years sacrifice’. He should be commended.” 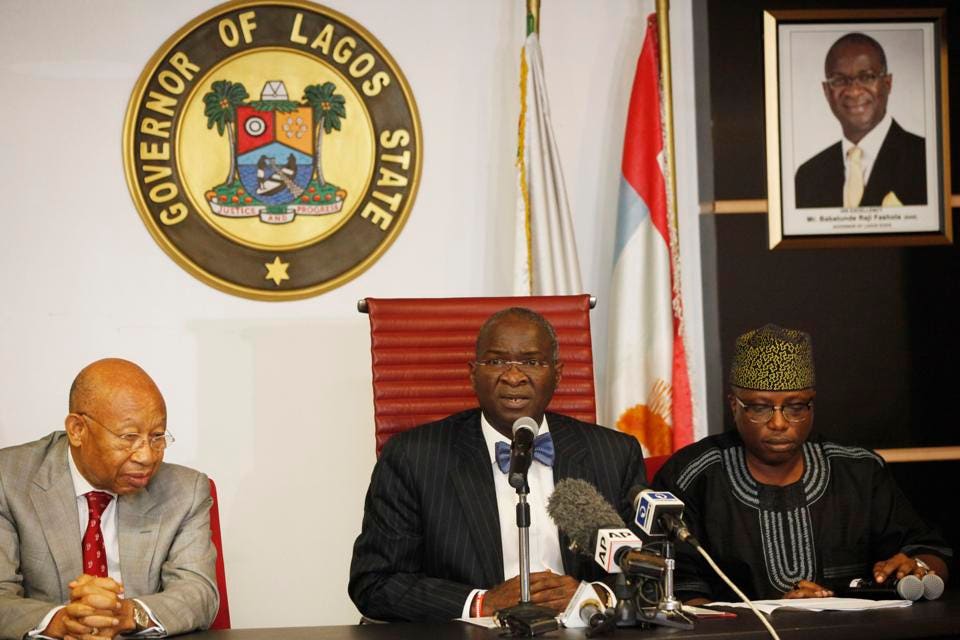 Pascal Dozie, left, Lagos state Governor, Babatunde Raji Fashola, Commissioner for special duty, center, and Wale Ahmed speak during a presentation of medical protective kits for Ebola treatment centres, in Lagos, Nigeria, Monday, Sept. 1, 2014. The World Health Organization says up to 20,000 people may contract the virus and it could take at least six months to bring it under control. (AP Photo/Sunday Alamba)

MTN Nigeria is the market leader in the mobile telecom space in Africa’s most populous country, with more than 67 million customers at the end of last year, according to the Nigerian Communications Commission.

With a market capitalization north of $6 billion, MTN Nigeria becomes the second largest company on the Nigerian bourse after Dangote Cement which has a current value of more than $8.3 billion.

MTN chose a listing without an IPO, simply opting to list its existing shareholders’ equity. Its current stock price is N108 per share. The paperwork it filed for its public listing also reveals who the biggest individual shareholders are.

Even though most of them on this list have used their MTN shares as collateral for humongous loans according to a highly placed Nigerian banking executive who confided in this reporter, these are the 6 richest shareholders of MTN Nigeria.

Victor Odili is MTN Nigeria’s largest individual shareholder with 806,886,900 shares currently valued at N87.7 billion ($244 million). The Nigerian businessman is the chairman and executive director of Aeromaritime Group, a parent company to over 8 member-companies operating in different sectors across Nigeria including shipping, stevedoring and oil and gas.

Pascal Dozie is the founder of Diamond Bank, a commercial bank which recently merged with Access Bank to create one of Nigeria’s largest financial institutions. His Family Office, Kunoch Limited has investments in hotels, financial services and energy in Nigeria. Dozie owns 340,409,900 shares or 1.67% of MTN Nigeria, a stake currently valued at N37.07 billion ($102 million).

Tunde Folawiyo is the managing director of the Yinka Folawiyo Group, a conglomerate with interests in energy, agriculture, shipping, real estate and engineering. He owns 218,815,100 shares or 1.07% of MTN Nigeria, a shareholding that is worth N23.83 billion ($66.1 million).

One of Nigeria’s most renowned commercial lawyers, Gbenga Oyebode is a founder and Managing Partner of Aluko & Oyebode- a successful corporate and commercial law firm in Nigeria. He owns 181,776,250 shares or 0.89% of MTN Nigeria, a stake that’s currently worth N19.8 billion ($55 million).

He is the founder of Quaditect Consultants. He is also the Chairman of Drill Masters Africa, the largest indigenous exploration drilling company in Ghana, the Chairman and Chief Executive Officer of XEX Limited Nigeria and the Chairman of Interglobal Limited, a leading IT company in Nigeria. He owns 152,717,850 shares or 0.75%, currently worth N19.35 billion ($53.75 million).