Abuja, Nigeria (CNN)At least one person has been shot dead and two others injured as hundreds of kidnapped Nigerian schoolgirls who had been released were reunited with their parents, eyewitnesses told CNN.

The girls were abducted on Friday by armed men who raided their state-run school in Nigeria's northwest Zamfara State, police said. A spokesman for the area's regional governor Bello Matawalle said Tuesday that all 279 girls had been safely returned and accounted for.
But violence broke out as the schoolgirls were reunited with their parents in Jangebe on Wednesday, eyewitnesses told CNN.

Witnesses said parents who wanted to take their children home grew impatient with government officials who were making speeches. The officials also told parents they planned to keep the girls at the school overnight before sending them home, observers said. 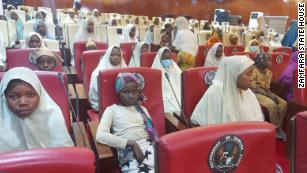 Video obtained by journalists on the ground showed the relatives yelling and storming into the hall where the girls and officials were. Youths who came in with the adults started throwing rocks at government officials, parents said. Soldiers then opened fire, which led to further chaos with parents scrambling to grab their daughters.
One parent, Safiyanu Jangebe, told CNN: "We got tired of waiting. The government officials were talking and talking while we were just waiting to take our kids. They started saying that they would hand over the girls to us tomorrow (Thursday). We couldn't take that ... some angry youths started throwing stones at the soldiers. They started firing and shot three kids. One is dead. Why is the government treating us without human feelings?"

Abubakar Shittu's son was one of the teenagers shot. Video provided to CNN from journalists at the hospital showed the boy laying in a bed with a bloody leg.
"After they abducted our daughters look how soldiers came and shot our kids. Now which of these pains are we going to deal [with]," Abubakar said in the video, as he is standing over his unconscious son, who is lying on a hospital bed.

Zamfara Police Commissioner, Abutu Yaro, denied that his men shot at parents and children, calling the reports "fake news."
"I think the parents hurriedly carried their children because they think they come from very far villages, that was what happened," he said. "As for the shooting that is a fake report, I do not have that report on my table."
Immediately after the incident, the local government imposed a dusk-to-dawn curfew on Jangebe, it announced in a statement on Wednesday. "This is to prevent any further breach of peace," read the statement, which did not refer to the shooting.

The girls' abduction is the latest in a string of kidnapping cases. At least 42 people were abducted from a state-run school last month and later released, and more than 300 schoolboys were taken and later freed in December.
Kidnapping for ransom is rife in parts of Nigeria and has become a major security challenge. State governors regularly pay ransoms to secure the safety of victims but rarely admit to doing so.